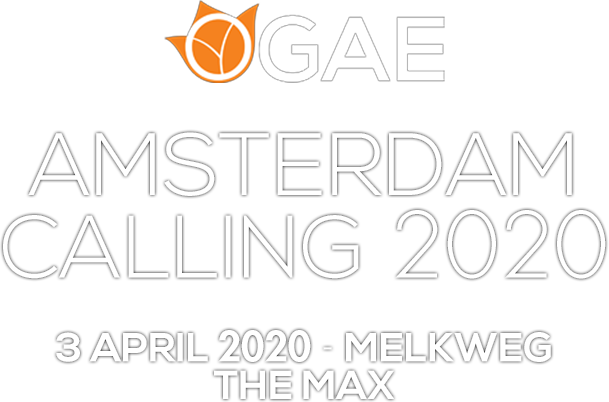 Yes, we’ll do it again! The 2020 edition of the annual OGAE-party Amsterdam Calling will take place on April 3th on in the Amsterdam pop venue De Melkweg. This time even on the MAX stage! Just as last years event (sold out completely) it will be 100% Eurovision, with a line up of Eurovision stars from past and present, singing not only their own entries but other Eurovision classics as well! Of course participating artists will announce themselves here, very soon. Tickets will be available in a short time.

We are working hard to get a fabulous line up completed to perform at the 2020 edition of Amsterdam Calling!

Come visit us again: in the weeks to come we will introduce participating artists right here ->

represented Finland in Eurovision Song Contest of 2013 in Malmö with her song Marry Me. She also participated in Swedish Melodifestivalen in 2016 and 2017. As a television presenter, she has hosted the national Finnish pre-selection Uuden Musiikin Killpailu since 2016. On April 3th she will host Amsterdam Calling 2020. She is just as excited as we are!

represented the United Kingdom at the most recent Eurovision Song Contest in Tel Aviv, Israel with the song ‘Bigger Than Us’. He started his musical career in 2014 by participating in the 11the season of The X Factor. In 2018 he took part in the first edition of the BBC show All Together Now and won the final. Just recently he released his new single ‘Somebody’.

represented The Netherlands at the Eurovision Song Contest 1977 in London with her entry “De Mallemolen”. In the national final she was a dark horse between the likes of Maggie MacNeal and Bonnie St.Claire. In her home country her song became a real evergreen. After Eurovision Heddy performed in several theatrical song shows and performed as an actress. She has not sung ‘De Mallemolen’ in public for quite a while.

represented Hungary at the Eurovision Song Contest 2011 in Dusseldorf, Germany with her song “What about my dreams”. Kati’s breakthrough came a year before in 2010 as a finalist of the Hungarian version of the talent show X-Faktor. In 2012 she was a juror at the national final for the ESC. Although Hungary will not participate in the Eurovision Song Contest 2020 in Rotterdam, Kati will make a great representation at Amsterdam Calling 2020.

represented Albania at the Eurovision Song Contest 2009 in Russia with the song “Më merr në ëndërr” (Carry me in your dreams). Kejsi’s career started when she was only 11 years old in the talent show Young Voices of Albania, winning the first prize. At the age of 16, she won Albanian Idol.

Here you can have another look at the contestants that helped make Amsterdam Calling 2019 succesful!

was born in the Netherlands, but moved to the United States at a very early age, grew up there and started a singing career. He returned to the Netherlands at the age of 19 and kept singing. In 1965 he participated in the Dutch national finals for the Eurovision Song Contest with the song ‘Geweldig’ (‘Fabulous’). He did not win the ticket, but the song became a Dutch hit record. In 1968 Ronnie participated in Eurovision with the song ‘Morgen’ (‘Tomorrow’) but the results were disappointing. The English version of the song became a hit record by the Blue Diamonds. Ronnie has had a succesful and stable Dutch carreer ever since. Nowadays he’s still performing, last May as a special guest with the Toppers (ESC 2009) in the Amsterdam Johan Cruyff Arena.

participated in the Irish national finals a stunning total of nine times. She performed at the Eurovision Song Contes twice, both times with a Johnny Logan song. In 1984 she became the runner up with ‘Terminal Three’, in 1992 she brought victory to her home country with ‘Why me’, a Eurovision classic. Only months ago she released an album with new versions of both her own entries as well as other Eurovision classics.

was a backing vocalist for Belgian Eurovision entries Loïc Nottet (2015) and Blanche (2017) before she participated as a solo artist for her own country, the United Kingdom. Her live performance at the final was disturbed by a stage invader, but she managed to finish her song in a fabulous way. Although the final result was not extremely succesful, she is greatly admired by Eurovision fans.

participated in Eurovision in 2017 with the song I feel alive, after having performed as a backing vocalist in the previous years with Nadav Guedj (2015) en Hovi Star (2016). He now performs simply as IMRI.

represented Iceland at the Eurovision Song Contest in 2010 with her song Je ne sais quoi, which was partly in Englisch and partly in French. The year before she became second in the national final of Denmark with the song Someday. She also could be seen on the Eurovision stage as a backing vocal for the Icelandic entries in 2008, 2009 and 2015. This year Hera will participate again in the Icelandic national semifinals with the ballad Moving On. The national final will be held on March 2nd.

is a pop-rock duo from North Macedonia, consisting of vocalists Bojan Trajkovski and Marija Ivanovska. The group had chart successes in their home country and won Skopje Fest in 2015. In 2018 they participated in the Eurovision Song Contest in Lisbon with their song Lost and found.

is known in his home country Ireland as a singer-songwriter and actor. In 2012 he reached the live shows of The Voice of Ireland and in the same year he reached the final of Britain’s Got Talent, ending fifth. He represented Ireland in the Eurovison Song Contest 2018 with the song Together. Nice to know: Ryans uncle Gary O’Shaugnessy took part in Eurovision as well, in 2001, with the song Without your love.

was already a succesful singer in her home country before performing at the Eurovision Song Contest in 1987 as the Dutch representative, as a part of the girlgroups Tulip and Babe. After Eurovision she also started a career as a presenter. Together with Eurovision-artists Maggie MacNeal and Sandra Reemer (later on replaced by Justine Pelmelay) she toured as the Dutch Diva’s. She performed as a special guest star in 2018 at the concerts by De Toppers (Eurovision 2009) in the Johan Cruyff Arena.

Unfortunately Marga could not host the show after all, as a result of physical discomfort. Singer and presenter Laura Vlasblom (former member of Frizzle Sizzle, ESC 1986) was so kind as to take her place. With just a few days of preparation she did an excellent job!

Amsterdam Calling is sponsored by